A problem faced within the Ethereum blockchain as well as Layer 2s is the segmentation of assets, especially NFTs. When an NFT is created on a Layer 2, the NFT is stuck on that layer. This leads to the problem of NFT silos, where NFT assets on Layer 2 cannot be withdrawn to Layer 1. Having a way to create and transfer NFTs across multiple layers is important in order to introduce NFT applications to Layer 2s.

Create a way to easily transfer NFTs across layers and reduce the gas requirements by minting the NFTs on Layer 2. This lets the user decide when they would like to withdraw their NFTs to Layer 1. 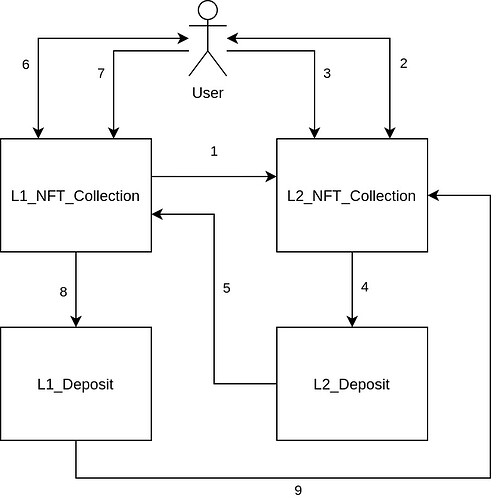 Claiming the NFT on Layer 2

(Re)depositing the NFT on Layer 2

A rollup can be used to manage the chain ownership. In this way, the transaction cost can be greatly reduced. Layer 1 in this case can be treated the same as other rollups to some extent.